Brother From Another Mother

Posted on March 9, 2016 by annabellefranklinauthor

No, you’re not seeing double – the one on the left is Tommy, Snip’s new BFF. 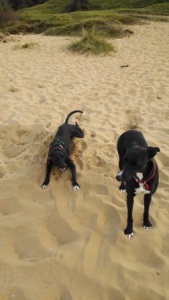 Tommy is a young black Lurcher who lives with one of our neighbours, and he and Snip have become best buddies. Tommy hero-worships Snip, and Snip laps up the admiration. They call each other ‘Snipster’ and ‘Tomster’, and when the two of them are together Pearl and I might as well not exist. Snip doesn’t even come to the house any more, and we suspect this is because he has more fun at Tommy’s.

I can accept their bromance, as my relationship with Snip is long over; but Pearl’s nose is firmly out of joint.

She hates it when they go hunting together and leave her behind. The other day when the four of us were out together, Snip and Tommy disappeared into the undergrowth on the far side of the bay. Pearl waited for them to come back, then shot off into the undergrowth herself. She was gone a long time, long enough to get us all worried. Eventually the boys could stand it no longer and went in after her, whereupon she trotted calmly into view, batting her eyelashes, delighted she’d got their attention.

Normally I’d be calling her a drama queen, but for once I’m on her side. Since teaming up with Tommy, Snip has developed a decidedly sexist attitude and I can’t approve of sexism in any shape or form. He won’t race with Pearl any more because he doesn’t like the idea of being beaten by a girl – if she shows any sign of getting ahead, he plants himself firmly in her way and gives her a mouthful of abuse.

‘Walk away, Pearl,’ I tell her. ‘There are plenty more fish in the sea.’ But Pearl refuses to give up on Snip; one way or another, she’s determined to join the gang. She’s even changed the spelling of her name to ‘Prl’ in an attempt to be cool. It makes me sad to see my once proud sister reduced to this. Even if they accept her, it doesn’t mean they’ll respect her – she’ll just be their bitch. I’ve told her this, and I’ve told the boys they’re a pair of sexist so-and-so’s, but who listens to me these days? Pearl says I’m bitter because Snip dumped me, and the boys just think I’m a grumpy old woman.

It’ll end in tears, I’m sure – and I’m the one who’ll have to pick up the pieces.

14 Responses to Brother From Another Mother