The Twilight Zone Next Door #Halloween

Posted on October 28, 2021 by annabellefranklinauthor

I live next door to an Airbnb, so quite often there are people there who don’t know me, or no one there at all. This is a problem when stuff I’ve ordered gets delivered there by mistake – something that happens more often than it should.

On the plus side, it’s inspired a story for Halloween! It doesn’t involve ghosts, but hopefully it’s weird and creepy enough to suit the season…

Image by OpenClipart-Vectors from Pixabay

THE TWILIGHT ZONE NEXT DOOR

Bang! Tinkle! Plonk! Screech! Bang! It’s hard to concentrate with all this noise. I’m on the sixth book in a series – first draft – and I need all the peace and quiet I can get.

The house next door is an Airbnb. It’s weird, it could be the same people staying there every time. First you hear their footsteps crunching on the gravel and the sound of their chat as they come up the path. Then the front door opens. Then someone says ‘Ooh! A piano!’ Then some kid (there’s always a kid) starts attacking the keys, bang, tinkle, plonk, up and down the keyboard. No one ever stays there who can actually play a tune.

Brian (the bloke who owns the place) lives in his garden shed. He’s always been a bit weird. His thing is inventions, and sometimes I’ve heard him hammering and drilling at night, building some machine or other. Until recently I never knew what his inventions were meant to be for. They never seem to have made him any money.

Like I said, Brian’s a bit weird. Smiley on the surface, but there’s a dark undercurrent. If people annoy him, he usually gets his own back in some subtly mischievous way that no one can actually call him on. Before he turned his house into a B&B, he used to rent it out. One time, the neighbours on the other side complained to the Council about the noise he was making in the shed, and a week later he moved some lads into the house who were into all-night parties. The neighbours couldn’t accuse him of doing it on purpose, since he’s entitled to rent his house to whoever he likes.

I decided a while ago there’s no point taking issue with Brian about noise. I’m used to the B&B guests now, and most of the time they don’t bother me. But on days like this, when I need to concentrate, it can be irritating.

The kid has stopped playing avant-garde atonal music now. I can hear him – or her – running around the house, up and down the stairs, jumping on the furniture, shrieking. The grownups are out the back, on the patio, talking loudly. Their voices sound like they’re coming through a megaphone.

I’m particularly keyed-up at the moment because the proof copy of my fifth book was meant to arrive two days ago and it still hasn’t come. According to Amazon it’s been delivered, but it certainly hasn’t been delivered here. Why can’t the delivery people get it right? They’re always losing parcels. It seems to be a particular problem around here. We have a community Facebook page, and nearly every day someone posts to ask if their parcel has been delivered to someone else’s house.

I wonder if my book has been delivered to the B&B by mistake? Amazon always say to check with the neighbours if your parcel hasn’t arrived. I don’t particularly feel like going round and asking a load of strangers if they’ve had a parcel, but this parcel is too important to lose.

As I go outside, it strikes me the B&B guests never arrive in a car. Mind, there are terrible parking problems in our road; people are always moaning about someone parking in ‘their’ space. I expect Brian warns his guests to park somewhere else.

I crunch my way up the gravel path. I can still hear the kid in the house – he sounds like he’s playing football in there. No wonder Brian has to do so much work on the place to keep it up to standard.

The front door is at the side. I can’t see a parcel left anywhere. Looks like I’ll have to ask the party. Damn! I don’t like tackling strangers, especially ones who sound so exaggeratedly extrovert. It’s like they’ve done some sort of acting course in how to sound like you’re having a Really Great Time. Why does no one quiet ever stay there?

When I get to the patio, I have the shock of my life.

There’s nobody there. Just some gadget on a table, attached to speakers. That’s where the Really Great Time is coming from.

I turn to look through the back window, but there’s no kid inside the house. Just another gadget on a table, making banging, shrieking noises.

Then the piano starts up again. No one is playing; it’s one of those pianola things that plays itself. Up and down go the keys, plink, plonk, tinkle, bang. It’s like the whole set-up has been designed with the sole purpose of annoying the neighbours.

Then I notice the weirdest gadget of all. I don’t know how I didn’t see it straight away; my mind must have tried to block it out.

It’s a giant ring made of iridescent metal, containing a whirling hole in the fabric of reality. It looks like those pictures of black holes you see in the space shows on TV. Except it isn’t quite the same, because black holes are empty and this hole has stuff in it.

Parcels. Loads and loads of them, all shapes and sizes, dancing around each other in the void. Any one of them could be mine.

Well, there’s no way I’m going to try and retrieve it from that. I’m going to go away and pretend I haven’t seen it. I’ll call Amazon and tell them I’ve asked the neighbours and they haven’t received it. I’ll tell them they’ll have to send another proof copy of my book, because the last one has disappeared into a black hole.

After all, that’s the truth of the matter. 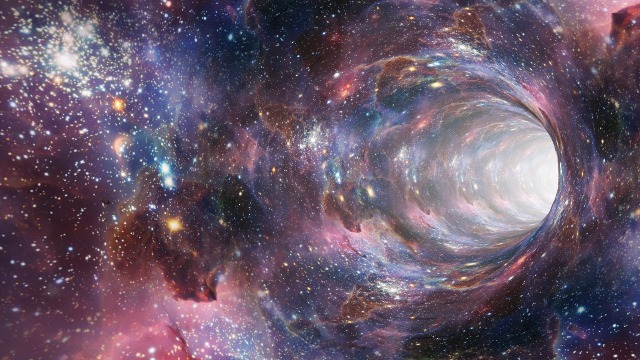 Image by Genty from Pixabay