The Joy of Tinkering

Posted on February 17, 2021 by annabellefranklinauthor 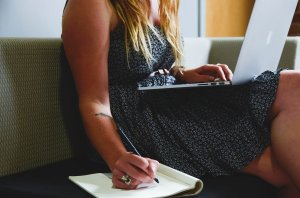 Image by StartupStockPhotos from Pixabay

Editing is my favourite part of the writing process. The first draft is like pulling teeth, and marketing is a wall-to-wall stressfest, but tinkering with a story is pure unadulterated fun. I love fleshing out characters, colouring in scenes and tweaking the whole thing until it’s as damn near perfect as I can make it. Sometimes I think I only write a first draft so I’ve got something to tinker with.

Some years ago, I felt compelled to write a series of surreal comedies. It started off as a short story, but the characters came to vivid life and wouldn’t let me leave their world. The stories were unpublishable – the humour was too childish for adults, and the material inappropriate for children – but writing them was like an addiction to laughing gas. I felt terribly guilty because I knew I was neglecting my day job and other responsibilities for something that would never make me a living, but I got such a buzz from it, I couldn’t stop. And when they were finished, I couldn’t stop tweaking them. I was like a man who keeps a motorbike in his front room for tinkering with – a motorbike he never rides.

It wasn’t a complete waste of time, though, because I learned a lot about the craft. I learned the importance of leaving a first draft to ‘marinate’ before I started tinkering. Coming back to it with fresh eyes, I could approach the story with the clarity of a potential reader and mine the diamonds from the dross. I discovered that setting up a gag is like climbing a hill, while the gag itself is like skiing down the other side – the uphill walk mustn’t be too steep for the reader, or the downhill ride won’t be worth the effort. I learned that, with a little persistence, I could turn the messiest first draft into a story that worked for me. Best of all, there were ideas in those ‘motorbike’ books I could use in stories that might work for others.

Since my humour is so childish, I decided to adapt some of those ideas and write for children. I remember what it was like to be a child, reading books that took me to a world I wanted to live in and made me laugh along the way, and I’ve attempted to do that in my own stories. I’ve now published two middle-grade novels, and written drafts for five more which I intend to publish as a series. These are currently ‘marinating’, awaiting tinkering.

Bereft of something to tweak, I’ve recently dug out the first drafts of two old ‘motorbike’ books I never got around to editing and spent a glorious few weeks tinkering with them. I’ve rediscovered the joy of working on something that doesn’t have to please anyone else, taking pleasure in the process without worrying about the result. I don’t feel guilty this time, as it’s helping me hone my editing skills and reminding me that a first draft doesn’t have to be perfect – a good thing to remember if you want your first draft to flow.

And at least it’s not making an oily mess all over the front room.

Image by SplitShire from Pixabay

Header image by nile from Pixabay

4 Responses to The Joy of Tinkering