Posted on November 27, 2016 by annabellefranklinauthor 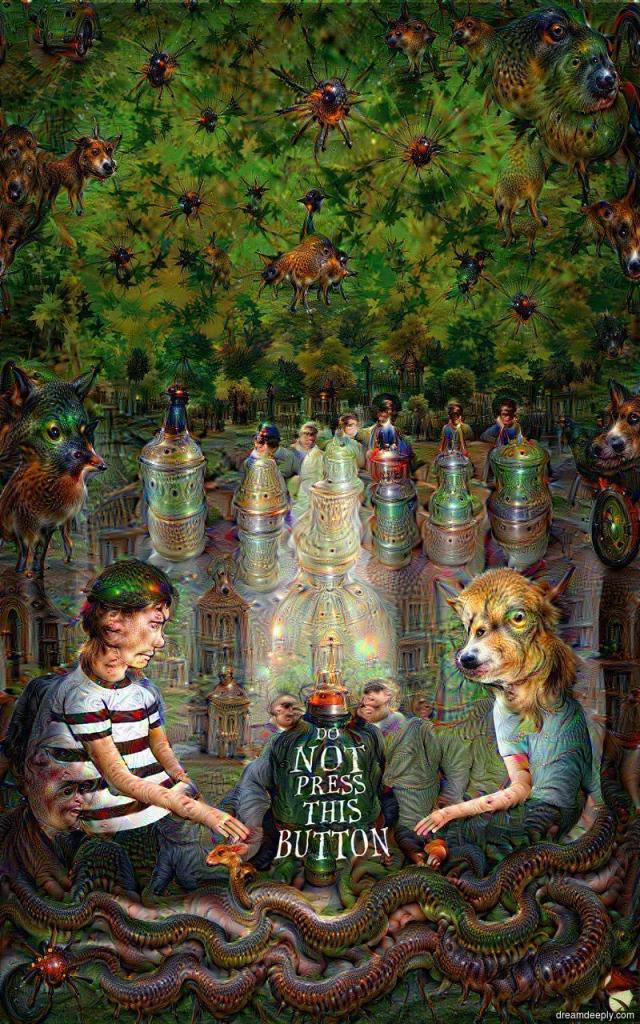 The button opened like a great big eye. Inside was a spinning kaleidoscope of forest foliage, which spread out rapidly in a circle. Everything around it – trees, fungus, beer cans, Tracy, the stone itself – rose up and formed a swirling tornado-like tube. Steven stopped being Steven and joined the whirling tangle of leaves and brambles as it became a complicated geometric pattern in shades of green, yellow and orange light, like living stained glass.

Steven could never remember exactly what happened next because he lost consciousness, and when he first woke up his mind was a total jumble. The only other time he’d woken up feeling like this was after he’d had his tonsils out; but now he was lying on dirty old leaves instead of a clean hospital trolley.

As his head cleared, he remembered pressing the dreaded red button. His heart lurched and he sat up with a gasp.

To his relief, he still appeared to be in the clearing. His watch had stopped at 6.45, but he guessed it must be pretty late; all signs of sunlight had vanished and it was even darker than before. Tracy had gone, and someone had cleared away all the old beer cans and other trash – including the stone.

‘The park keeper must have been here,’ thought Steven. ‘Why didn’t he wake me up? I’ve been asleep for ages.’

He got up, brushing dead leaves off his clothes and trying to make sense of what had happened. ‘I suppose I must have had a look through that Gateway,’ he said shakily. ‘Tracy did say we could just look…’

Where was Tracy? She must have gone home without him. Typical – leaving him to sleep on and get into trouble for being late.

Why had he gone to sleep, anyway? He looked around the clearing and shivered.

‘Time I was out of here,’ he muttered. ‘Looks like I’ve had a lucky escape.’

He began to pick his way back along the bramble path, eager to get home and back to normality. He hoped Mum wouldn’t confiscate his GameBox to punish him for being late. He was looking forward to a game of McDivott before bed…

It seemed to be taking him ages to get out of the copse. He stopped and looked around, but all he could see were endless trees in all directions.

‘I must have come the wrong way,’ he thought. ‘I didn’t think the wood was this big…’

Then he realised the trees themselves had got bigger. Huge, in fact, with great big thick trunks and tall twisty branches that stretched up into the twilit sky. Neatly-cut grass covered the ground, dotted with small bright flowers of every colour. Weirdest of all, everything was glowing slightly, from the smooth green lawn under his feet to the small patches of deep blue he could see through the foliage overhead.

‘How did all this get here?’ he asked himself. ‘And why is everything glowing, now the sun’s gone down?’

Things didn’t just glow on their own. At least, not in the normal world…

Now he really was scared. He dashed about madly, first one way, then another, trying to find a way out of this weird wood. He went on running until he was out of breath, then sat down on the grass and shut his eyes tight.

‘Please, please, make it go away,’ he wailed.

‘Make what go away?’ said a cheerful voice nearby.

‘All this,’ said Steven, shutting his eyes tighter still. ‘F-Fairyland, or whatever it is. It’s not supposed to exist!’

‘Sorry about that,’ said the voice. ‘But I’m afraid it very much does exist, which means I can’t really make it go away. I suppose what you actually want me to do is make you go away.’

‘Can you do that?’ said Steven.

‘All right, then. Open your eyes.’

Steven opened his eyes. Before him on the gently glowing grass stood the most hideous creature he’d ever seen in his life.

It was a spider – but a ridiculously big one, about twice the size of Steven himself. Yellow and black tiger stripes covered its great fat body and long hairy legs. It had ten horrid red eyes waving about on stalks, and a cavernous mouth lined with giant yellow fangs that dripped with noxious green gunge.

Faced with a horror of this enormity, there was only one thing to do. Steven turned and ran for his life.

Every life is special !

Writers In the Family

For the latest information about my new book releases and promotions

A Blog By Tricia Drammeh

... get creative and write

Spirituality, Reality, & Everything In Between

AS I LIVE & BREATHE

A Woman's Journey With Rare Disease