A Matter of Balance

Posted on June 4, 2014 by annabellefranklinauthor 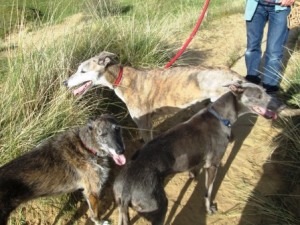 Our best friends Owen Bowen and Mollie haven’t been very well this year.  Mollie had a bad stomach that went on for ages, and poor O-Bo has lost one of his legs.  Apparently it broke and had to go for recycling – at least, we think that’s what happened to it, as that’s what usually happens to broken stuff.  Anyway, he hasn’t got it any more and has to manage with three.

It hasn’t slowed him down much – he springs along like a Paralympic athlete.  It’s simply a matter of balance, which Owen is very good at.  He does get tired more quickly, though, and can’t race Pearl like he used to.

I thought Pearl might lose interest in him, heartless hussy that she is, but to be fair, she loves him just as much as ever.  Not that either of us see as much of him or Mollie now. Owen actually finds it easier to run than to walk, which means that whoever walks him has to run  as well.  Jan and Alain have been enthusiastic runners for years so it isn’t a problem for them, but Annabelle (who is disgracefully unfit) finds it hard keeping up.

If you ask me, Annabelle spends too much time sitting on her bottom.  She says it’s because she’s a writer and most of her exercise takes place inside her head, but that’s no excuse – we all need to exercise our legs as well.  Again, it’s a matter of balance.

If Owen can run now he’s one leg down, surely Annabelle can manage it with her full complement of two!

19 Responses to A Matter of Balance