Posted on March 5, 2014 by annabellefranklinauthor

It’s the season of wild winds and dinky daffodils…

…and spring tides flooding the valley behind Three Cliffs Bay. 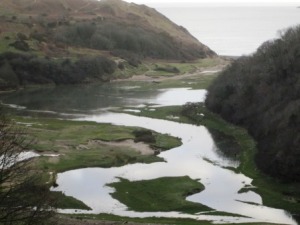 The other day, Annabelle took us down to the shingle bank at the end of the valley to look at the sea.  The wind spirits were playing with the water spirits, sending the waves in different directions and whipping up sunlit spray on their crests.  It was very exciting.  Even Annabelle found it exciting, and she doesn’t normally like wind.

Further out, we could see a man walking on the water.  Annabelle said he was ‘paddle-surfing’.  Whatever he was doing, It looked dangerous.  The waves were bigger than he was and circled him like a pack of wild animals intent on violence.  In the end he disappeared round the point, where the waves were smashing on the rocks.  I hope he didn’t fall in.

Annabelle wanted to take a photo of the crazy sea, but the sun was in her face so she decided to look for a better position.  The next minute, we were all climbing up the cliff.

I didn’t like to say anything, but it seemed like a bad idea to me.  Pearl was on the lead because there were noisy kids about, and it’s really not advisable to take a nervous Greyhound on a lead up a narrow, rocky path with an almost sheer drop right next to it.  But Annabelle had heard the call of the sea spirits and there was no stopping her.  All I could do was go ahead and try to find the safest way.

Sadly, there was only one way, and it wasn’t safe.  As we climbed, the path got steeper, the wind got stronger, and Pearl began to get scared.  We’d just reached a precarious rocky crag, when she refused to go on.  I went a bit further in an attempt to encourage her, only to find that the ledge ended in a steep slope of slippery grass that none of us would be able to climb.  There was nothing for it but to go back down.

At that point, Annabelle got scared as well.  I could sense her fear even before she looked down at the boiling, thrashing water below and started muttering ‘Oh my God, why have we come up here, this was a really stupid idea.’

For several minutes, none of us could move.  Annabelle and Pearl had both frozen and I couldn’t get past them.  Worse still, Pearl could hear some naughty boys throwing rocks on the shingle bank and I sensed she was about to go into full panic mode.  If she started pulling and twirling on the lead, she and Annabelle would both go over the edge.

It was time for some Millie magic, so I threw my brindled aura over the two of them and sent them some calming vibes.  Annabelle began to inch down the rocky path on her backside, gently tugging on Pearl’s lead and encouraging her to follow.  I encouraged them both from behind, and somehow we got down in one piece. If it wasn’t for me, we’d still be up there now, stuck on a ledge in the middle of a cliff like those silly sheep you see on TV who need rescuing by the coastguards.

Annabelle never got her photo of the wild waves.  She was lucky not to end up underneath them.  I just hope she’s learned her lesson – never bite off more than you can chew!